I had taken a beautiful leftover piece of ash home after my class with Chris Schwarz, in the hopes of finding a perfect project for it.

Eventually it came to me that the thing was almost the right size for making a saw bench. Though I already have a saw bench, it is never bad to have two and it had been some time since my last staked project so I decided I was going to make a saw bench based on the design in the Anarchist’s Design Book.

All went well until I realized that I only had three legs that were dry enough to be used immediately.
So a change of plan was in line. Was I really going to wait several more weeks to have a leg from a different tree ready?

I didn’t think so.

A saw bench with 3 legs would be too unstable to work on so I re-thought the design and made some drawings. I came up with a small three legged beer table, to be taken outside in the summertime (with the added bonus being that it is always stable on any uneven surface).

We have always struggled with our unstable tables outside so this was the perfect opportunity to greatly improve our life.

Start from the top

I first created a model of the table: 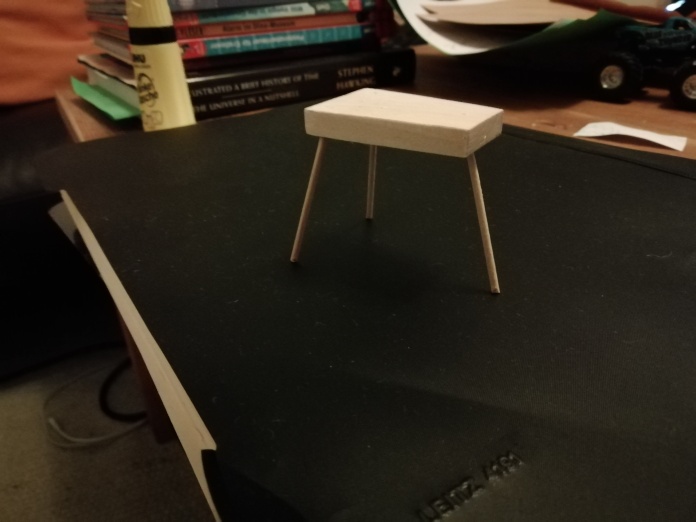 model of table out of linden (basswood) and skewers

The form of the table that I decided on is a trapezoid, so some material had to be removed from each side. I don’t have a band saw (only hand saws) and I didn’t feel like sawing through hard ash for an extended amount of time so I used my trusty single bevel hatchet to chop the waste off, around 2mm from the line, the rest to be planed away with my scrub plane (with the grain) and eventually a jack plane and smoothing plane.

Legs are something special

Once the top was done I wanted to make the legs a particular shape I had been thinking about for a while. I had come up with the idea of making pentagonal legs for a project, just to see how it would look, and this was the perfect project to try this on. I made the legs out of some maple I had found in the woods a while ago.

Stencils come in different shapes, all very practical to have around

I used a stencil to check what the maximum size pentagon would be that would fit on the edge, thus determining the final size of the legs. The distance between a flat side and a corner of the pentagon is the maximum distance, therefore I want to maximize that distance to make as thick a leg possible.
Planing the legs into pentagons was easier than expected. Create one flat surface first. Once that is done you rest your leg onto this flat surface on your workbench and plane at the angle indicated by the pentagon you drew on the edge, on both sides. Flip it to another flat side and plane at an angle again. Easy peasy.

With the legs now done, it was time to drill and ream the holes, and taper the legs to form tenons.
I used a V-block in my front vise to plane the tenons to their rough shape with a block plane, a technique from Chris Williams that Chris Schwarz posted on his blog recently. This worked perfectly, and was much easier to control than using a draw knife.

The legs are drilled at an angle of 15 degrees, with the front leg having a sightline of 0 degrees and the back legs 64 degrees. This at least keeps half the bench in line with the original saw bench this was based on. 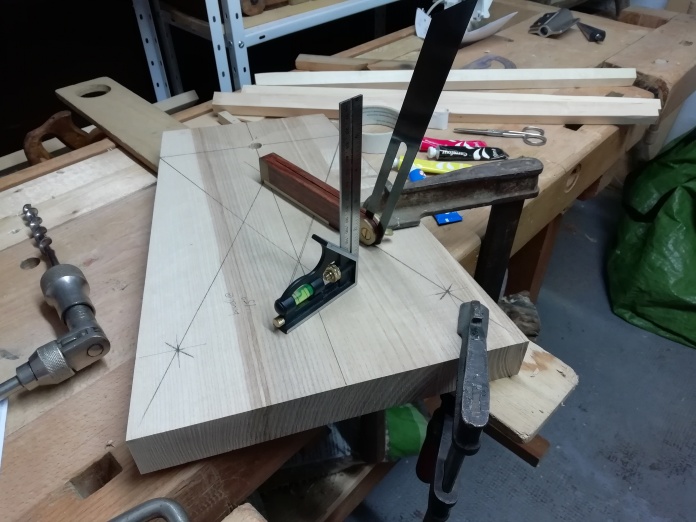 I decided to add a bevel to the underside to make the bench appear lighter. The bevel is quite steep because it would otherwise have interfered with the legs. I like the bevel being steeper than 45 degrees and I think it gives the bench a more dramatic appearance.

Adding a bevel to an edge

Orientation of 5 corners and 5 flats

After some experimenting, I decided on orienting the front leg with a corner going forward (flat facing the middle) and the two back legs with the flat facing outward (corner facing inwards). This gives a striking appearance that gave deep positive feedback when glancing at it or seeing from the corner of your eye.

It’s almost like the legs are square, but your brain tells you otherwise.
It is not easy to see in the pictures but in person the effect is interesting to say the least. 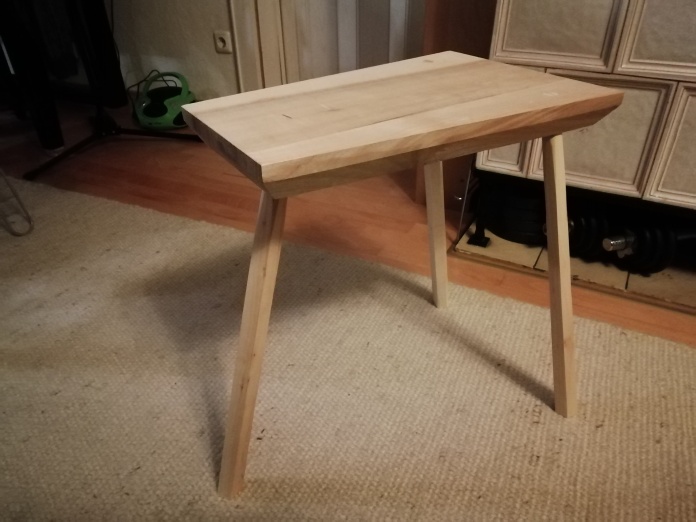 I am very happy with the table and in some way glad that I only had three legs to work with! Next experiment will be with septagonal legs – I’m excited.